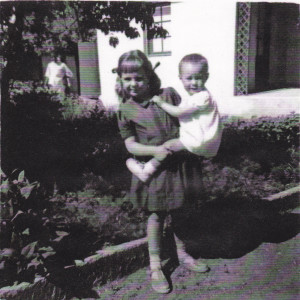 Patsy Ann and May J

My story actually begins long before I arrived on the scene. I have learned that my heritage affects much of who I am and the world views I hold are influenced by my parents and their parents and those before them. All of us grew up where we did because of the choices made by our parents. I happened to grow up in India, and not China or Tibet, because of choices my parents made when they could no longer live in either of those places due to the political situations of the times.

The places in which my parents grew up affected my life, but in ways I did not understand until much later. I remember the visits to the United States every five years always included stops in “Upstate New York” and the Philadelphia area of Pennsylvania. This is because my mother came from New York (“Upstate” always intoned with a sacred inflection to separate it from the city and locate it UP toward Heaven), and my father from Pennsylvania. I did not understand the significance of this until years later when I went to University for my undergraduate studies and took US History. My mother all of the sudden started to be understandable. Her tastes in clothing, food and ideals for children and young lady-hood became clear. The kink was in holding those slightly unattainable goals since we were located in rural India. My father, in spite of being from Pennsylvania, adored all things Indian and would probably never have bothered with returning to the US if he had had his way.  This was the tension my sister and I grew up with, and is a tension I still live with.

I have my feet planted in both places, and my heritage encompasses both East and West. I am what is frequently called a TCK (Third Culture Kid). Our parents’ heritage, plus the one we grew up in, come together to create the third, blended culture. We are blessed with being both, at the core.  Some TCKs view this as a curse, but it truly is a blessing. I acknowledge that it took me quite a while to come to this position of blessing rather than curse. This blended culture is a theme that encompasses and surrounds me and will show up in my writing. The people who most revealed these two worlds were my ayabhai and my mother. One from the east and one from the west; one illiterate and from the village, one educated and well-traveled. And yet they had a core value that was the same, and that is where my particular blessing came about. My dual discourses, or two worlds, had the same focus and purpose. My ayah and my mother had the same purpose and vision for life and for me. That was, and continues to be, my blessing.